My husband just shared with me a little bit about this awful accident. Anybody has more info?

Not sure about one on Iron Point, but last night I believe there may have been one on Folsom Blvd. near Glenn. The road was closed for what looked like a single car accident and a helicopter landed in the parking lot nearby, but they weren't taking anyone away in it.

Please don't tell me we had two fatals in this town this weekend alone.

Road racing....and an innocent woman from Shingle Springs was the victim.....

what a tragic waste of life!

I don't understand why the police here do nothing about that. Never ever see them around that area, but I do see them parked at the parks a lot chatting on their cell phones.

Again, my thoughts and prayers go out to ALL of the families involved in this tragedy!

I want to know why these 17-year-olds were driving a BMW 5-series and a Dodge Stealth. I can't even afford to drive those cars. Just another illustration of the spoiled rich kids in Folsom.

So sad for that mother's children.

Here is the article...

FOLSOM -- A 53-year-old wife and mother on a weekend shopping trip was killed in a car wreck Saturday by a teenage driver who was street racing, Folsom police said.

The woman, driving a black Toyota Solara, was pulling out of the Folsom Premium Outlets and turning onto Iron Point Road when a red Dodge Stealth broadsided her about 2:45 p.m., said Officer Michelle Beattie, Folsom police spokeswoman.

As officers and a civilian performed cardiopulmonary resuscitation, an ambulance took the woman to Mercy San Juan Medical Center.

She was pronounced dead about 5 p.m., according to the Sacramento County Coroner's Office.

The coroner identified the victim as Susan McNew of Shingle Springs and said she was married with children.

Beattie said witnesses had seen the Dodge and a white BMW 5-series vehicle apparently racing and changing lanes erratically for some distance.

Witnesses said the cars had reached speeds of 60 to 80 mph in an area where the speed limit is 45 mph, and there was substantial weekend traffic, Beattie said.

"There were a lot of people out shopping and going to restaurants," she said.

The Dodge and the BMW each carried a 17-year-old male driver and passenger. The Dodge driver was taken to the hospital and treated for pain, then arrested. His passenger also was treated and released.

The BMW driver, who was unhurt, also was arrested. His passenger was sent home.

All the teens knew each other, Beattie said.

"They're all 17," she said. "They're all boys. They're all friends. A woman shopping and heading home is caught in the middle of their game and killed. It's tragic."

Both drivers will be charged with vehicular manslaughter and reckless driving, Beattie said. Their names were not released because they are minors.

No drugs or alcohol were involved in the collision, she said.

NOTE: I also saw the news on TV last night and this morning. The mother of one of the boys came out and said that her boy just would not do such a thing (street race). With all the witnesses I can not believe she could say such a thing. I am sorry, as parents we just can not be with our children 24-7.

My wife and I really feel for the family of this 53 year old woman.

Well, the parents gave their 17 year-old boys Dodge Stealth's and BMW's to play with and this is what happens. 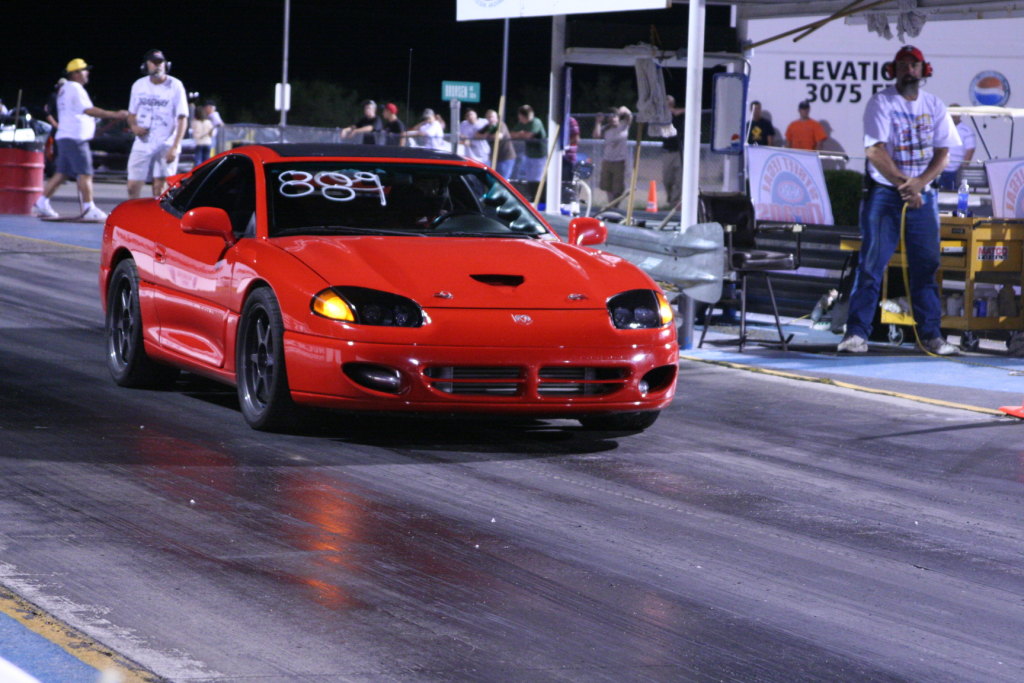 the kids were from fair oaks and orangevale. I don't think its fair to generalize about "spoiled rich kids from Folsom." I think its a general lack of respect for speed and the safety of others that is prevalent in our culture. I am always amazed when those road racing movies come out and no one seems to object. We live in a car culture that is causing many many problems in our environment (i.e. dependence on foreign oil, air pollution, global warming, suburban sprawl). People use their cars to project their personality, rather than using it as a tool.

what a damn shame for everyone. my first thought was that I go in and out of that intersection all the time with my family and it might have been us.

Does anyone think more traffic police on the streets would help? I am kinding of thinking it would. People, including teens, mind their manners and watch their speed when they know they might get a ticket. Have we opened up the traffic court in the police station yet? It would be nice, so our police wouldn't have to take the time to drive down to Howe Avenue or whereever it is, to appear at hearings.....Maybe they would give out more tickets then and increase enforcement. They do a good job in this town, but there is a lot of speeding going on, teenagers or not.

Knowing the past helps deciphering the future.

What a shocking, sad story. Such a tragedy for all the families, but especially for the family of the woman, who was an innocent victim of such stupidity.

What kind of parents give teenage boys expensive sports cars to drive?? What do they think 17 year olds are going to do with such cars?? Such overindulgence contributes to these kinds of incidents.

That said, I agree with Robert that we don't really know all the facts. Was the accident at the traffic light? Did the boys blow through the light, or did they have the right of way? Even if they had the right of way, however, their excessive speed and reported recklessness will probably make them at fault.

Dumb, dumb, dumb. Guess the boys' college funds will be going to pay their legal bills instead. Or perhaps the parents will need to sell those nifty cars... (And if I sound mean, please forgive me-- it's only because I am feeling so sad thinking about that poor woman, and her children left behind... )

"Ah, yes, those Gucci extremists and their Prada jihad!" --ducky


Even better was the mother of one on TV stating that her kid was innocent that he never speeds, and we need to wait for the investigation to see what really happened. Yet witnesses all say the cars were speeding.


/quote]
Even better was the mother of one on TV stating that her kid was innocent that he never speeds, and we need to wait for the investigation to see what really happened. Yet witnesses all say the cars were speeding.
[/quote]

I think you'd be hard-pressed to find someone who drives a Stealth who doesn't speed. Why bother? I have no doubt those boys were speeding. Now, whether they caused the accident or not, remains to be seen. I know when I was a teenager I drove fast and I drove a crappy Datsun 510. Also, street racing is nothing new. My brother was killed in 1963 when some neighborhood kids were drunk and drag-racing and hit him head-on while he was stopped at a stop sign. Of course, back then the boys didn't even get a ticket until my dad threatened to tear down the police station. Luckily times have changed. I do think stricter enforcement would help, but I don't think the threat will do it. I think the kids have to actually be caught. IMO

Regarding the mom on the news, while I feel for her and would hate to be in her position, I think it says a lot that she is so naive (in denial, whatever) to think her boy doesn't speed. I hope when my kids are teens, I won't be so clueless.

Finally, no matter who was at fault, this situation is awful. That boy will need to live with the fact that he killed a woman, and that woman's family will be without her.