Snow Pack Gets A Huge Boost - Is It Enough? 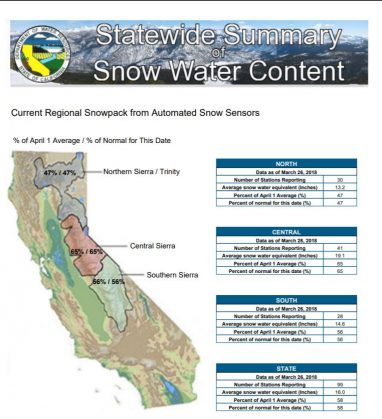 At the end of February, the Sierra Snow Pack was a dismal 22% of normal.

The media and social networking sites were abuzz with predictions of gloom and doom.

Then March came along, with a series of storms dumping massive amounts of snow, bringing the statewide average to 58%.

Folsom Lake, for example, is usually just over half full this time of year,  peaking around the beginning of June at about 80% of capacity.

Today, it stands at 85% of capacity, and with the new spillway completed, Folsom Dam operators are able to hold more water than in the past without risk of flooding.

“Even if the snow pack never gets to ‘normal,’ and it probably will not, things are not in that bad of shape for the coming season,” AccuWeather Senior Meteorologist Ken Clark said.

So, it looks like we won’t be having any water shortages this year, but as always, it’s a good idea to conserve.

it will have to be.  let's hope next year is at least as good.

Knowing the past helps deciphering the future.
Back to Folsom General Discussion